the latest firefox 96.0 upgrade has fixed buttons while using the titlebar-less mode. The previous versions upto 95.0 used to follow the set gtk themes for the minimize, maximize and close buttons, but in the latest version it stopped following my set theme and just defaults to using windows like buttons even tho I’m using breeze theme. All other gtk apps seems to work fine and use the breeze buttons. all except firefox.

Can anyone help me fix this? I want firefox to follow my theme and use breeze icons for the titlebar (tab-bar?) buttons.? 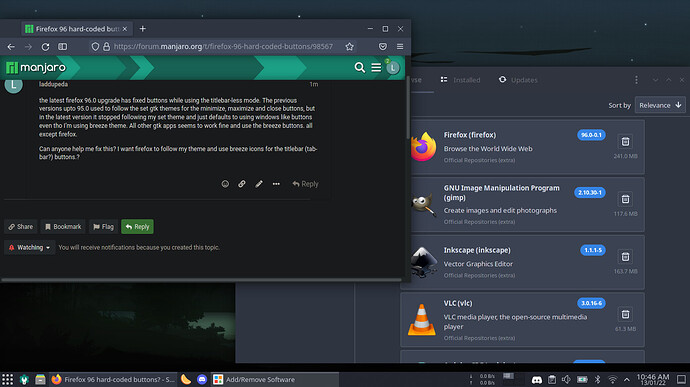 As you can see the pamac, which uses gtk, is using breeze buttons as it should but firefox is not.
I am suspecting maybe firefox switched to gtk 4 and that might be the issue but I can’t find any documentation for it.
Can anyone please help me here.

I am suspecting maybe firefox switched to gtk 4

Can anyone please help me here.

Have you tried right-clicking the toolbar, choosing “Customize Toolbar”, and then checking or unchecking the “Title Bar” option at the bottom left?

I did and then it starts using plasma’s window decorations, which works fine but honestly i think that’s a waste of screen space. Putting the buttons in the tab bar
was one of the best changes ever made to browsers and I want to use it that way. But using it with the buttons in the tab bar will make it use the ugly windows buttons regardless of the gtk theme set. It used to work fine in 95 and it still works fine if I downgrade it.
But downgrading it locks me out of my profile and forces me to use a new profile without my data. So I’m stuck in 96.

This only happens when you use any of the built-in firefox themes except the system theme. Go to Settings > Themes and set it System Theme 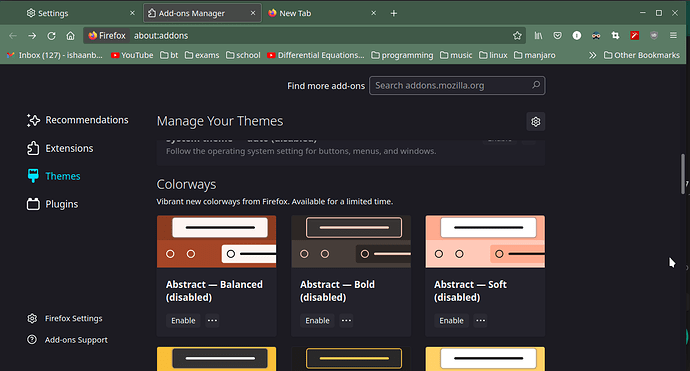 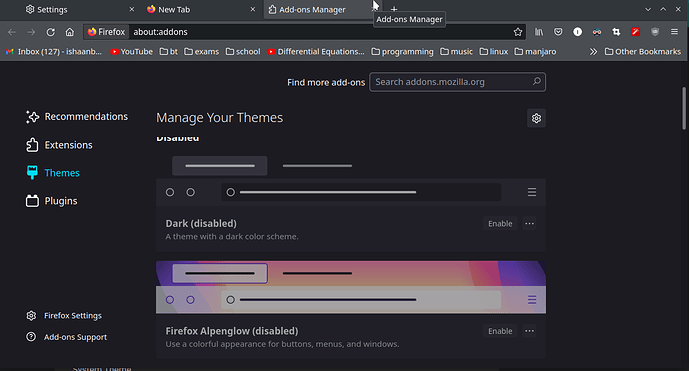 I’m using the system theme on my Firefox 96 and the buttons are the breeze buttons on my end.

I tried, but … there is no system theme there anymore. I don’t know where it went. Also I’m not using any of the built-in firefox theme but my own. changing theme doesn’t fix it. I tried changing to several themes, they do not affect the buttons at all. Thank you for your help anyway.

edit: IT WORKED!!! THANK YOU! I couldn’t find the system theme earlier cause I have a huge list and i’m stupid. It uses breeze buttons only with system theme. It is kind of weird tho cause it worked with other theme created by users before.
THANK YOU SO MUCH!! 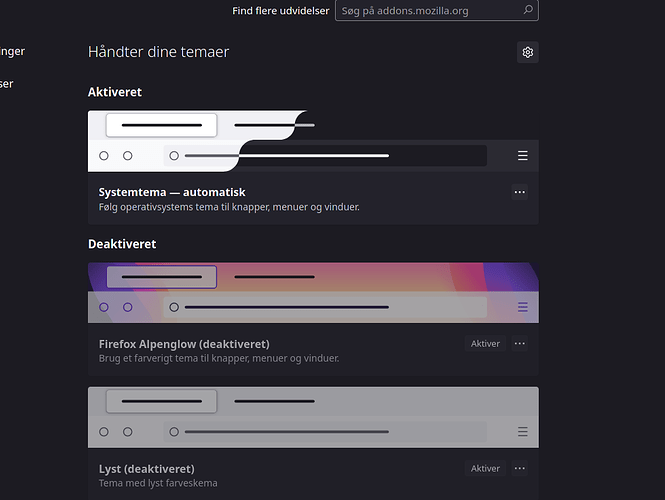 Problems with Firefox theme after update to ver. 96 Software & Applications

My firefox button was perfect until I update today to the version 96, now the buttons of windows are square instead of following the rounded buttons from WhiteSur theme for gnome. When I try to use the default theme for firefox the WhiteSur theme works, but If I try to use any other theme suggested by firefox itself, the buttons get squared. When I try to open “Help” it follows the system window button, but not in the browser itself: [Screenshot from 2022-01-12 15-42-51]

Yes they work on system theme, thank you.

I’m sorry if it’s a stupid question but where is the userChrome.css file?

First of all you don’t need to do any of that now if the issue is fixed cause because playing with this file (generally) causes a mess!

It is just a additional method of customizing firefox using a set of pre-defined rules.

WOOOHOOOOOOO baby! that was a ride. I found some stuff on userChrome.css and now my firefox looks like an acid trip. Imma go bounce on my boy’s firefox to this for a while.
Thanks ma man 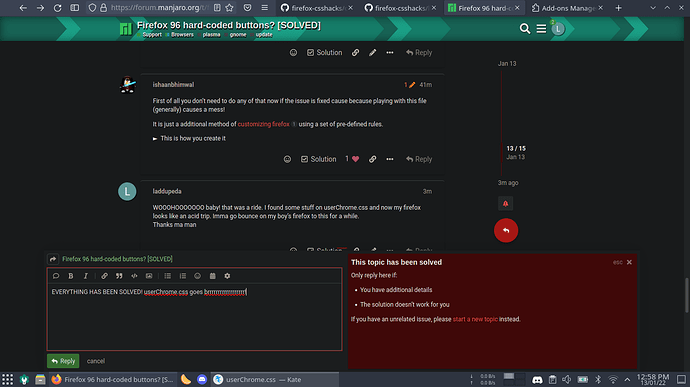 Using the system theme works, however i am using a firefox color theme… i want to know how i can use it while keeping my gtk-themed window buttons, like it was in previous versions… that’s all… but i have no idea how to

First of all you don’t need to do any of that now if the issue is fixed cause because playing with this file (generally) causes a mess! It is just a additional method of customizing firefox using a set of pre-defined rules.

And this one to restore the default window control while using firefox themes: