Hi, I’m newbie.
I’ve just start a fresh install and updating the system, but upon restart, I cannot go pass through “[Failed] Failed to start Simple Desktop Display Manager”. Is there any way around?

Sounds like a partial update to me. From TTY please run this commands as your user:

If the issue still persists, from TTY once again you run:
systemctl stop sddm

Try to start your session with:
startplasma-x11
`

I don’t know how to run TTY as user. I try to change some parameter in BIOS and end up having ‘there is no bootable media’.

Now, I’m doing a clean install right from the start.

Hi, I am having a similar issue and following your advice, when I try to run

I get $DISPLAY is not set or cannot connect to the X server.

But the sddm is not running?
systemctl status sddm 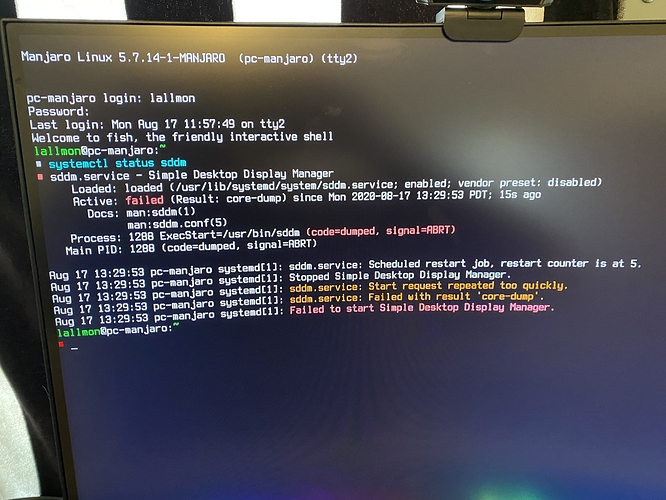 Unfortunately the same thing. Is there a clean way to uninstall/reinstall xorg and led plasma without affecting the rest of the system?

Do not unistall packages, just reinstall them the way i mentioned above about sddm and plasma-desktop.
sudo pacman -Syu xorg-xerver xorg-xerver-comon xorg-xerver-wayland

This is just an example.
Is the display failing to start too if you create a test user and try to log in?

Appreciate the help, but I just ended up reinstalling as the time my computer was down, is longer than the time it would take to set it back up (maybe lol)

Did anyone find a fix? This is the second time it’s happened to me and I’m not installing Manjaro again. The only thing it says for me is “[Failed] Failed to start Simple Desktop Display Manager” and I can’t type anything…

I am facing the same issue.
Did you find any solution to this?

I have just encountered this issue as well after the 2020-08-22 update.
@bogdancovaciu I booted off a Live USB and use chroot too run the reinstall you suggested but it did not rectify the issue.

@lallmon: thanks for the photo! exactly what happened to my system today…

@el1x: feel you here, don’t know which update exactly bombed my system that way but encountered it today.

Solution in my case was, what bogdancovaciu posted with stopping, disabling and enabling sddm. After reboot my system could start up again.

A post was split to a new topic: Could not resolve host

I also had the same problem.
It was a driver(graphics) problem.
I did the following to solve it …
Ctrl + Alt + F2
Input username and password.
Then hit Enter.
Now type mhwd -l -d
Here you will see a list of installed and available drivers.
In the list of available drivers you might find some with PRIORITY: 0 .
Sometimes they are the ones causing problem.
As for me it is was video-vesa .
So, all I had to do was remove it.
To remove it you may use the following command.
sudo mhwd -r pci [name of driver]
Note: pci because it showed ATTACHED: PCI in mhwd. If it shows ATTACHED: USB you need to type usb instead of pci
For me I typed sudo mhwd -r pci video-vesa and removed the driver.
Then I rebooted my pc. sudo reboot.
Finally, I’ve solved the problem and also know what caused the problem.

Yesss, this did the trick for me. I had recently installed video-vesa without knowing what it was. Stupid me. Thank You!!

I am using optimus-switch-sddm for graphics because it was the only way for me to get my Linux laptop to work with external monitors properly. GitHub - dglt1/optimus-switch-sddm: easy installer for optimus-switch for SDDM, sets up nvidia PRIME and also allows for easy switching between intel/nvidia (prime mode) and intel only mode where nvidia gpu is powered down and no longer visible. modes are switched with "sudo set-intel.sh" or "sudo set-nvidia.sh" .

In addition, I also ran the below (not sure if it mattered) and rebooted.

My problem was exactly the same and your solution resolved the issue.

Thanks!
This worked for me too.