anyone help me why expressvpn extension in chrome not working , error app not found but successfully installed expressvpn app in manjaro os, and i can connect to USA or other server 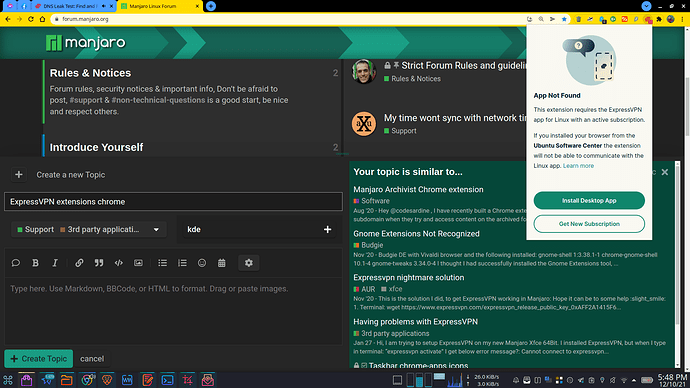 (…) but successfully installed expressvpn app in manjaro os, and i can connect to USA or other server

So you already have an active vpn connection, no need extension in your browser

ok but expressvpn extension already installed, you can see that in screen shot

Here, read this fully and you should be able to.

already followed all tutorial but extension not detecting expressvpn app

Yes really frustrating. ExpressVPN extension had never worked for me on Manjaro with Brave browser. Yes it worked with Chrome and Firefox (and obviously the desktop app was installed and working).

It’s very frustrating. I did just write an app at GitHub - Danie10/warp-cli-gui: GUI app to read settings and stats from Cloudflare WARP CLI for Linux, and change some settings for Cloudflare WARP which is similar to what ExpressVPN does, and if there is any interest, I could whip one together for ExpressVPN. It just interacts with the CLI to connect, disconnect, show status, change some settings, and maybe choose alternative locations to connect to (browser independent). But won’t be a browser extension per se. But maybe firing up Firefox or Chrome may still be good for most folks.

First off … browser extensions are just that - they wont have any effect on the rest of your system.

But I could also mention there are at least 2 different express vpn GUI packages in the AUR.

Here is a possible solution to having a similar GUI as the browser extension, but it runs independently on the desktop - it’s working for me. See https://github.com/bourretbrandon/expressvpn-gui. And also a Python based one at Vojko Pribudić / expressvpn-gui · GitLab.

Yes it worked with Chrome and Firefox

how you fixed this? i tried how many time i don’t know. with many restarts but never work.
and i tried expressvpn stable and expressvpn BETA both are not working , firefox and chrome.