Thank you, it seems the issue is not (only) about the DNS servers I am using, for three main reasons – but I may be wrong.

the NetworkManager, if I understand correctly, receives the DNS from my ISP provider, other computers in the house do just fine;

with:
DHCP (Automatic) addresses only
you can choose your own nameserver over the one provided by the ISP

but
if other devices, which connect through the same router, are working just fine
the issue is not likely to be the DNS server that your router (your ISP) provides

Indeed, given that “DHCP (Automatic) addresses only” (e.g. with DNS 8.8.8.8) does not seem to change anything, any idea?

maybe IPv6 is used and not working?
Try turning it off to test.

I really am no expert in troubleshooting this.

A basic troubleshooting guide is available

@linux-aarhus
Thanks. I’ll look into that and come back.

I followed the [root tip] it blocks with “drill” command which gives:

Error: error sending query: Could not send or receive, because of network error.

I followed the NetworkManager instructions for setting manual DNS, provided here: Networking - Manjaro, but I still get:

I am affraid I might have to reinstall the whole thing – and maybe switch back to debian.

N.B.: I do not have traceroute installed, so cannot install it.

This is the problem.

I’m not experienced with NetworkManager so I don’t know how to fix it.
Apparently, it configures your loopback device over IPv6 as DNS which doesn’t seem sensible.

I followed the NetworkManager instructions for setting manual DNS

Did content of /etc/resolv.conf change? If not, try manually changing nameserver to nameserver 1.1.1.1. Does it work then?

I do not have traceroute installed, so cannot install it.

You can use tracepath instead. It’s installed by default.

Hello, if that what @zbe said didnt help I guess the people who help you need more information.

If so, please provide the output of these 3 commands:

maybe IPv6 is used and not working?
Try turning it off to test.

The resolv.conf had been changed with functional DNS, and it did not change anything.

I went to the IPv6 Settings of my current connection and selected ‘Disabled’ in the method.

@kisun here are the command asked: 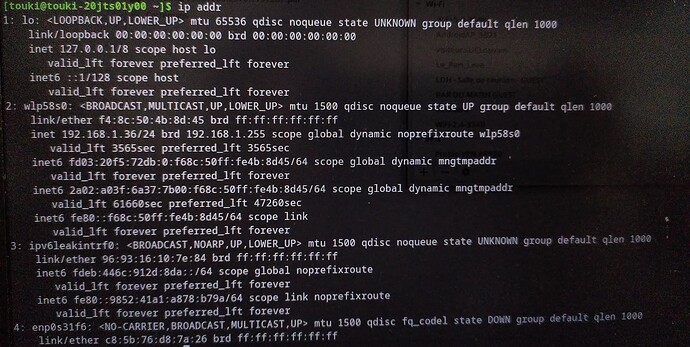 What is that ipv6leak interface? You must have set it up somehow.

Don’t know. Neever set it up manually. When looking online, it looks like it might be related to protonVPN. I am happy to get rid of the Interface / VPN, if necessary.

A problem that might sound similar (and remained unanswered) seem to have been flagged here: Internet not working since last update (NetworkManager doing weird stuff) (and indeed, I had to reinstall manjaro 3/4 weeks ago, for a similar problem that I could not solve).

it did not change anything.

So you are asking for help to fix a dns issue without telling us you have been fidling with vpn?

I am happy to get rid of the Interface / VPN, if necessary.

That would be nice - at least so it is possible to know it is not interfering.

There is nothing wrong with a pristine Manjaro system with relation to dns or networking and unless there is upstream regressions - which happens occasionally - with NetworkManager - updates doesn’t cause dns issues.

This is becoming more and more difficult to help with - because we cannot possibly know which changes you have made before consulting the forum so we are practically blind with relation to how to suggest you solve the issue.

Error: error sending query: Could not send or receive, because of network error.

Add the argument ipv6.disable=1 to the kernel commandline

Save and rebuild grub

I solved the problem : (1) I got rid of ProtonVPN (via Pamac), (2) I deleted the interface (sudo nmcli connection delete pvpn-ipv6leak-protection), (3) I reverted to Automatic DNS (undoing what I had done, following Networking - Manjaro), (4) I restarted the computer.

@linux-aarhus:
Thanks for your help – I did no change before consulting the forum, I believe I mostly wrongly assumed that ProtonVPN did not mess with DNS / Interfaces. For next time, do you have suggestions for sending the content of a console in text format from a computer that has no internet connection?

copy the text to a text file - transfer using usb

or from systemd status

I use protonvpn - I have never experienced this issue - but hey - there is something - if you are not using systemd-resolved - the resolv.conf is not always reset correctly - especially if rebooted while connected

i know i have had nothing but problems with protonVPN. at least on linux i have. they also seem to have some bugs with their firewall. Idk. But i switched to using Windscribe and have never been happier. i only pay $2 a month for unlimited use and i cant tell the difference in internet speed whether i have it on or off. Also i just use a openvpn config from them and set it right up in the manjaro network settings instead of relying on the VPN to have a working GUI.