I realize there is a fixation with “dark” by a tiny minority of PC users, but most take it way too far. 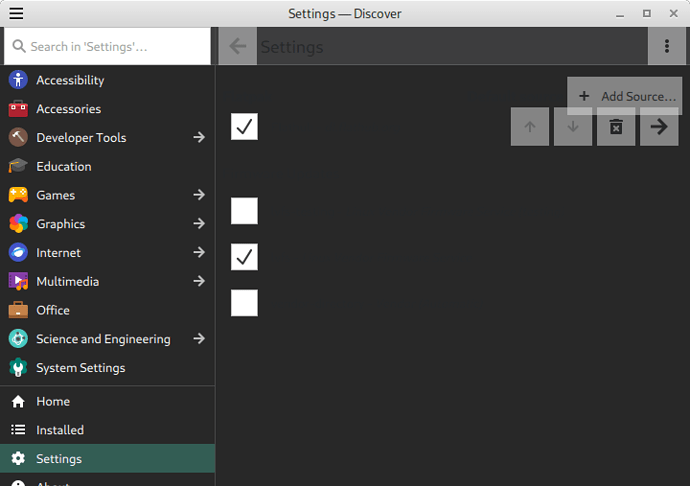 discover-too-dark720×508 41.5 KB
That is what Discover looks like on Manjaro Cinnamon. You can’t read anything on the right.

We need a method of changing this theme or we need the package maintainer to realize they must use a color scheme that looks good on an old fashioned VGA monitor. What looks good on your 4K monitor won’t work for 90% of users. That’s why successful package have high contrast basic colors like black on white and white on dark blue. Even black on gray works well for much of the color blind world.

What we have now for Discover does not work for standard monitors.

I think the issue is that you have a QT theme set wrong.

So, you should check in your kvantum/qt5ct settings to see if that makes it better.

Discover is desiged for Plasma and based on Qt toolkit.

It is a well known fact that mixing toolkits can cause theming frustration.

Cinnamon is based on GTK and with GTK4 the theming playground has been tightened a lot.

So I’d take @Strit’s advise and check the kvantum theme in use.

I had similar issues with virtualbox gui when using gtk and kvantum - it was a pain setup something usable.

I think the reason the app is displaying badly is because it relies on a Plasma colorschema which is not available on Cinnamon.

Well, I’m not knowingly using any Qt theme. Discover “auto-installed” when something else installed. Appears to be the only way to update flatpak stuff.

I will nuke discover.

Discover “auto-installed” when something else installed. Appears to be the only way to update flatpak stuff.

Another option is building a custom package named bauh from AUR

Discover “auto-installed” when something else installed.

So you must have installed/updated something related to Discover in the first place. Maybe an AUR package?

No, it came as part of a flatpak. At any rate, I uninstalled it. People gotta stop using Qt for things that matter.