Can't read the fonts in the Manjaro Settings Manager

So the latest update brought with it the nvidia 460 driver. I noticed that after the update, the Manjaro Settings Manager fonts were now readable, but the update also broke the ground textures for Far Cry 5. I read that other distros suggested going back to the 455 driver. So I tried the steps to compile 450 in the Stable Update thread detailing how to compile the 450 driver, but instead of 450, I tried to compile 455. That didn’t work because Gnome wouldn’t start after trying the steps. So I went back to kernel 5.10 and the latest video-hybrid-amd-nvidia-prime driver and everything back is to normal… except the Far Cry 5 textures were still missing and the Manjaro Settings Manager fonts were back to it’s old unreadable self. It’s a very minor inconvenience but is there a way to fix this? I’ve tried tweaking the theme settings but no luck. 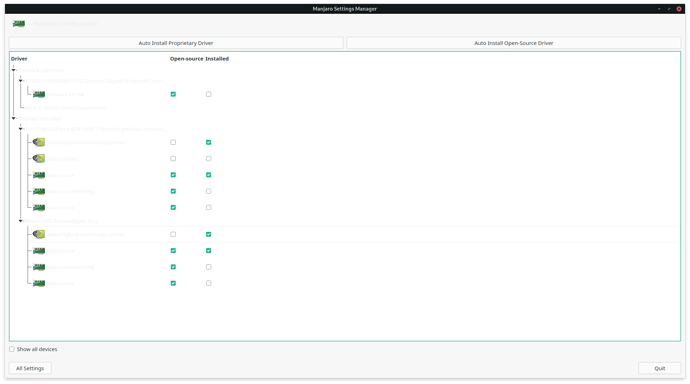 I don’t need everything rolled back, just the nvidia driver.

I have the exact same issue on a fresh install with default GNOME settings - my laptop has an integrated Intel HD 3000.

I can’t read the text in both “Time and Date” and “Hardware Configuration”.

Unfortunately I am unable to attach a screenshot - I keep getting this error - “Sorry, the file you are trying to upload is not authorized (authorized extensions: jpg, jpeg, png, gif, heic, heif)” even though I am using a png file.

Awesome! It worked! Thanks @smadgal!