Hey there.
I’m back in the Forum with another problem I have and I don’t know where else to ask for help.

TL;DR: Basically I’m trying to change the Rendering Backend of my Manjaro KDE - Installation due to problems it may cause with my OBS replay buffer.
However: This option simply does not exist.

I can’t change it in my system settings under the compositor nor is the option even a thing it the the config file in .config/kwinrc.

The situation is that I’d like to use OBS as an Instant Replay tool. I know that Replay Sourcery exists. But this only clips the last 30 seconds. And I’d like to have a little more.
Besides, I can clip the sound from each channel (5.1 configuration) with OBS. And of course OBS can use NVENC.
( To be fair, I haven’t spend any time trying Replay Sourcery at all so all of this may not even be true.
But I think that I shouldn’t have to use a different programm just because the one I’d like to use doesn’t work because of… I don’t know, magic maybe?)

The underlying issue is that the video file that gets recorded has what I assume is the Vsync blanking intervall as a black line visible in the top of the screen. If it’s happy I just have tearing where the upper part of the video is behind by an average of about .5 seconds.
(I may add a link to a clip that I upload to YouTube later here if I didn’t delete them)
I’ve tried a lot to fix that. Even distro hopped with different DE’s I liked. But I’d like to stay with Manjaro KDE because it’s the only one with the very specific function I’d like to have, at least KDE Plasma has. But that’s off topic.

These are the worarounds that I’ve tried and that did more or less nothing:

During this testing, it clicked that this must be an issue with Vsync.
I use it in games because I hate the tearing effect in games. Disabling that as well does help somewhat, it’s still noticable in the recording because now the game itself is tearing.

In the system settings I’ve played a little with the options I have for the Compositor. The only thing that also seemed to fix it was the box “allow applications to block Compositor”.
The issue with it is that part of the Desktop “blinks” through the game screen.

Basically it’s an issue that could be resolved with just either not using OBS, not having an NVIdia graphics card or just knowing what the issue is and what to do…

I didn’t want to make a new post about a topic that exists already numerous times about this issue with OBS so I just added all of the infos I could.

The latest change from me was the installation of the “video-nvidia” that was installed originally.

Here is my system info:

Here’s a screenshot from the Compositor. (keep in mind that it’s in German): 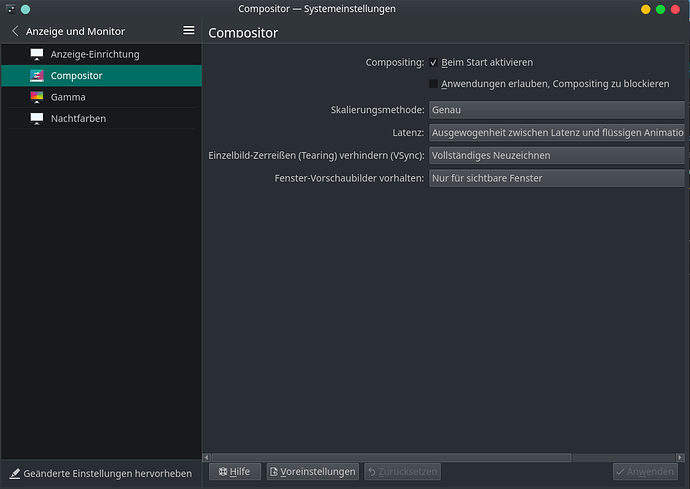 And here is the output of cat .config/kwinrc:

Anyways: If you need anything, just ask. I’ll provide everything I can.

I didn’t know where else to put it, but the reason why I’d wanted to try this in the first place is because of some comment about how there might be a performance improvement when using XRender instead of OpenGL, howver I cannot find the page I’ve got it from

Right now it’s working-ish so I thought of posting it and maybe resolving it later, I’m not yet depended on Manjaro as my daily driver… Not yet anywas.

And as one last question: What about the open source drivers? Would they be any good for playing games and recording them at te same time? I doubt it and with my luck I brick the OS, that’s why I didn’t touch them yet.

So, I’ve tried this just now.

TL;DR: disabling shows weird behaviour in games and the effects of turning it off seem to have varying effects on a per-game base.

Based on my observations it seems that it works sometimes and sometimes it makes no difference at all, albeit with worse performance and visible tearing on the Desktop when not turned back on.

First off, when I disabled the compositor with the mentioned shortcut, my game got an insane amount of input lag. I’d say it was about a second behind in menus as well as in the game itself. However, after activating and deactivating the compositor in-game again, it just went away and for this paticular game (The Long Dark) it worked. I compared it by turning it on and off, clipping and checking later.

When the compositor is enabled, ALL games seem to get this weird bug, where part of the desktop “shines through” the game itself. This is the state that this system is now in for some reason, because I don’t know what I did to get here. 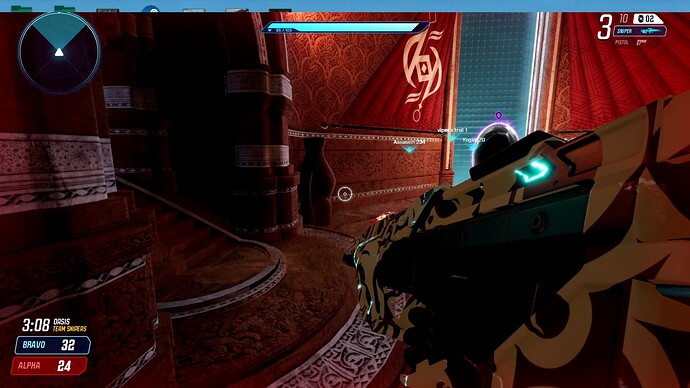 In Splitgate for example, turning it off seems to do nothing. The recording has similar tearing effects like before.
Doom 2016 via Proton also seems better without the compositor.
Half Life 2 didn’t care for either. However I didn’t exactly play for very long…
Both TLD and Splitgate running in the native Linux version and I’m assuming Vulkan.

I forgot to add as well that this problem with OBS was my initial reason why I abandoned Manjaro when I first tried it on my machine. Since then I wanted to get back in and I’m (mostly) determined to solve the issue. But I’m still unsure whether this issue is solvable at all, given how seemingly random my testing and results were. And inconsistent as well.

I could test more thoroughly next week but that’d be a bit to wait.
I’m sure it’s just some conifuration problem somewhere. Maybe because I use Vsync on all of my games and the compositor Vsyncs everything again? But then I’d see the tearing and artifacts too, not just the OBS recording… right?

Anyways, before I’m writing even more to comb through I’ll just not touch anything again.
I could provide you with the clips I’ve recorded, just so you could see for yourself and my nvidia-config if that’d be of any use…

[*]: I’ve had a secondary bar up top with the time and network activity.

you can try ‘tweaks’ from this link and see
if you still have issues, try creating a new user and check playing games with it

you can try ‘tweaks’ from this link and see

Wow, I don’t know how… But following this seemed to work.

if you still have issues, try creating a new user and check playing games with it

I didn’t even get to do that yet, however I doubt it would’ve even helped, considering how I’ve had the exact problems on two different installs of Manjaro on the same machine (around Febuary and the first install of my current one which I reinstalled after wanting to switch back to Mint and it refused to boot).

My guess, which has been around for a while now, is that simply my GPU is either broken or just… hates me.

However I do NOT have enough understanding of how Linux works to just claim that it does nothing for me, so if l have problems in the future, this’ll be one of the first things I’ll try now.

Anyways, before it get’s even more boring:
Thank you for your time and dedication to my problem

I hope this can help somebody else, otherwise I’d be the only person with theese weird problems… again