Hi guys
I just discovered a small bug with the Matcha theme in connection with VirtualBox under Manjaro Xfce. Since Kvantum was reintegrated into the default installation here (temporarily it had been removed, now it is part of it again), the guest window of VirtualBox is almost transparent and unreadable. I found out that the reason for this problem is in the setting within Kavntum Manager that affects the translucent windows in Matcha theme.

In the list of apps that should be ignored by the translucency in the Matcha theme, there is also the entry “VirtualBox”, it can be found under:
Configure active theme → compositing & General look → Translucent windows
As soon as I change the entry to “VirtualBoxVM”, the guest window looks completely normal again. However, it is not clear to me here whether the “VirtualBox” entry is just incomplete and needs to be changed, or whether it would be better to make an additional “VirtualBoxVM” entry instead.

@philm I would like to ask you to patch the Matcha theme accordingly, so that you don’t have to change something manually every time. The problem affects all installations of Manjaro Xfce that I have tested, even the fresh ones.

I would like to ask you to patch the Matcha theme accordingly,

FYI, the Matcha Kvantum theme hasn’t been updated for over three years.

Then, why is the guest window transparency issue in VirtualBox only occurring for a few months since Kvantum was added back to the default Manjaro Xfce configuration (possibly just as a dependency?). I can attach a screenshot if it helps. Anyway, VirtualBox is unusable in this state.

It affects the current VirtualBox version 6.1.36 as well as the previous version 6.1.34 (I noticed the problem only in these two). Possibly something was renamed in VirtualBox itself? Or when Kvantum Manager was temporarily removed from the default configuration, entries were lost or changed? I don’t know. 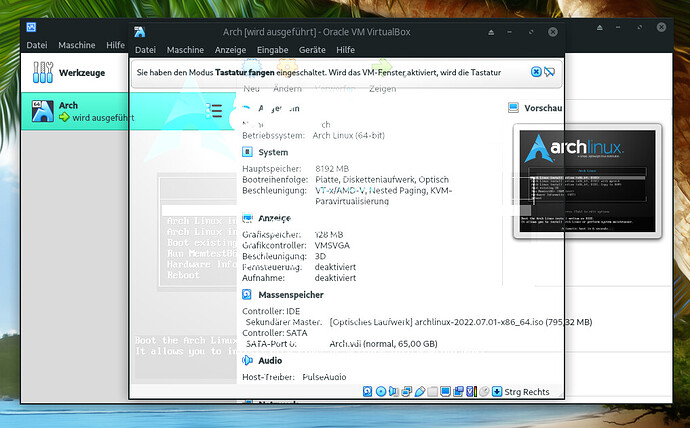 Thank you, that actually confirms what I wrote before. As I said, the entry “VirtualBox” is present in the corresponding list of Opaque apps, but not the entry “VirtualBoxVM”, which is obviously also needed. My question would simply be whether this could not also be added by default through a corresponding change in the theme. That would just be handy and might clear some confusion. However, I am surprised that it had worked until some time ago without manual intervention, or the problem with the translucent guest window did not occur. Whether someone or who has changed something here, is probably not discernible.

It is the default behavior of Qt and Kvantum which produces the issue - nothing much to be done at theme level.

I just checked with the developer of Kvantum Manager, who said that the entry “VirtualBoxVM” is definitely present in the list of applications to be ignored by the translucency. He said that each theme can have its own Opaque apps list. See the following Link here
According to this, the corresponding entry would have to be added to the Matcha theme after all. Without it, the guest window of VirtualBox is simply not usable in Manjaro Xfce.