First impression: This machine is snappier than the Mintbox mini.
However, it isn’t heatsinked as well, so it needs the fan for thermal
control.

The fan is audible during power on and when switching to
BIOS but otherwise is minimally active… For normal usage
(such as writing this post, listening to some music) there’s no
problem with performance and thermals up to 50C.

It’s very easy to run 8 CPUs on intensive calculations until the
temperature tops out at 80-85 Celsius, with possible spikes
into the 90Cs. This obviously isn’t sustainable for deep space
mining the computational universe.

Try senors-detect with all default answers shows up nothing,
The output of sensors (attached) doesn’t have anything for
the talked-about big loud fan.

This is where I’m stuck and have to ask for help. Can anyone
explain how to get the fan measured and turned up?

Depending on the used BIOS firmware the fan curve may differ.

The BIOS is the same as seen here: 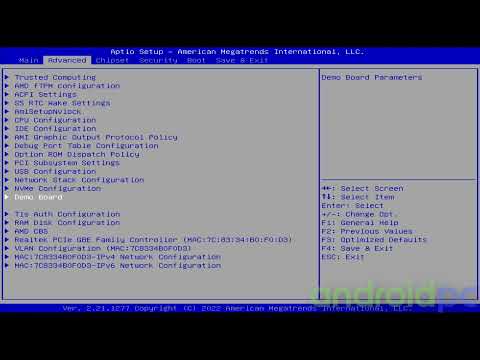 There is no power tab, so there’s no way to set a fan curve.
Thus far the “curve” has been more of a flatline by default.

Is some firmware designed to work better with linux than others?

Well, official homepage has this suggestion. One of our company support staff will try to contact Beelink also from our end to see what is possible.

Hi philm, thanks, that seems relevant.

The number on the back of the box is EJ0W64PRO-B,
not sure if the -B affects anything at all.

I’ve made contact with “George” from beelink,
who so far has only sent me a nonsense video.

If it is BIOS I could really be in trouble now.

This page from Arch Docs “Flashing BIOS”
has a lot of red boxes, and says quite clearly:

Usually, the update program provided by a manufacturer
must be executed under Windows.

Ich would click through the Bios tree and search for “Fan control” or similar.

The beelink people are having problems sending a new bios, by some
sketchy megaupload site, much less one checksums? ??

Next time I might go with Star Labs or something similar if they have
inventory and attractive processors.

A workable solution for now is just to set the governor to powersave
and under-clock to 1.4GHz.

Even at min. speed, the system is still very usable and I’m much
happier with thermals staying below 45C.

If the Beelink machine can do 1cpu year of calculations, I will be okay
happy with the purchase. Given the slowdown it should do 2-4.

“We’re going to get to Alpha Centurai, it just may take a little longer
than we had originally planned.”