Yes @spikerguy, I am the ravelo of the other forum

, tks for welcoming me here. I will be happy to share with this community my user experience on deploying manjaro on my vim1 SBC. For those unaware, I have the ap6255 wifi chipset variant because my vim1 is in fact called vim1 pro.
First comment is related to the instructions for installation; I have found than it is a better ux to use a single command line to install a distro to the emmc (all vim1s have emmc).
For the Linux savvy users, going thru the steps of multiple clicks to download a .xz file, uncompress it and then need a huge disk space for both files, then install something 3rd party package like etcher because you maybe do not trust the user and/or his SD card and/or his SD card interface. They you ask him to flash manjaro on a dedicated SD card , boot on it then eventually tell him to copy the whole distro from SD card to emmc.
Please allow the user to opt for a much more strait forward option if he is willing to skip a couple of those steps before. The user can chain for example wget with xzcat and with dd. Tthis is exactly what I’ve done and it made my ux as seamless as I expected.

I saved many wiki and posts.
(sometimes it’s better to work without internet connection)

Yes that is a good thing to do, It can help in emergencies.

Posting from Khadas VIm1 right now, Wifi suddenly started working, IDK why it was not showing up before.overall Khadas VIm1 with XFCE is quite usable. 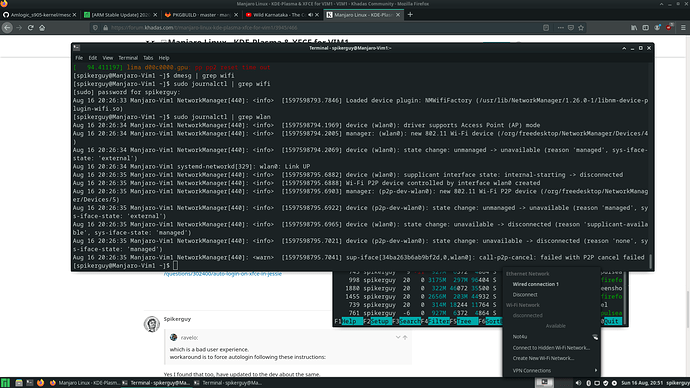 Currently listening to music on youtube while posting on here, screenshot below 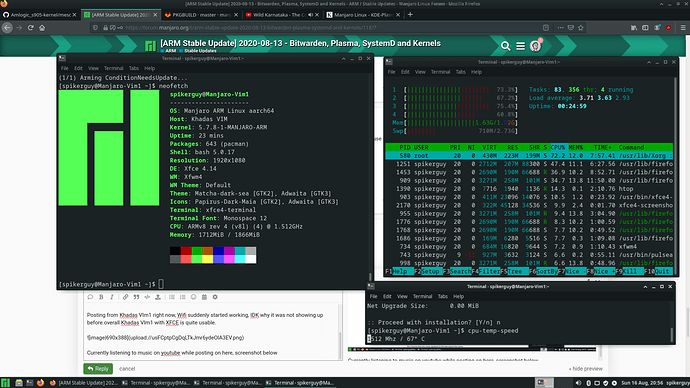 Please allow the user to opt for a much more strait forward option if he is willing to skip a couple of those steps before. The user can chain for example wget with xzcat and with dd. Tthis is exactly what I’ve done and it made my ux as seamless as I expected.

Do you mean direct installation to emmc right ? Normally we do have emmc installer images but those are mostly for Rockchip and Allwinner as they have much better boot process, This is the first image released with Mainline uboot for amlogic I can create an emmc installer image for the same, so user just have to flash it to sd and boot into it where user will only see image flashing screen.

Thanks for the feedback I think we’re on the right direction as you suggested.

I can understand you have an old proven process you want your average user to follow (involving multiple steps), let me offer my working oneliner suggestion for the others:

Actually, the manjaro-arm-flasher which is in the repo should also be able to install it to the eMMC.

And it has a GUI too.

6 posts were split to a new topic: Keyboard leyout not getting set on Vim1

A post was merged into an existing topic: Keyboard layout not getting set on Vim1

My usb-c to HDMI cable used to work, but after update, external display is no longer detected

Depending on the device you are using this might be a known issue - e.g. for the Pinebook Pro we already addressed this one with the author of the original patch.

Yes there is a regression in linux 5.8 usb-c patch I noticed it today when I tried to connect my pbp to my screen.

Let me know if I can support you here.

I apologize for my vague post. I had 2 different Manjaro forums windows open. I have a pinebook pro with the factory Manjaro kde installed. Everything has been fine with the usb-c to hdmi adapter for several months. I recently updated the kernel and some other packages, but after reboot, there is no video out. If this has already been addressed, please point me in the right direction as I spent almost all day searching for a solution to no avail.

Please keep in mind I am not a pro Linux user. I purchased the pinephone and pinebook pro to support the communities and learn.

Thank you all for your help.

It’s a known issue. The patch we used in 5.7 kernel, does no longer work in 5.8. We have mentioned it to the patch maintainer, so all we can do is wait until it’s fixed.

@strit @appelgriebsch @spikerguy Thank you all for taking the time to read my post. I really appreciate all the hard work the developers have put into Manjaro. I will wait patiently as I am confident the issue will get resolved.

USB C video out on the Pinebook Pro stopped working after the 5.8 kernel update.

The VIA USB billboard device shows up but Displayport never connects.

Read the posts above you. It’s a known issue.

Edit: i see others are having the same issue. I use external display every day. Please fix it

Is this a known issue ? I haven’t seen any infos about it.
Thanks.

I use external display every day. Please fix it

We have notified the patch maintainer. Hopefully we will get a fix for it soon.

Still happy with manjaro ARM on my Dealdig-Boxd6 (clone of a Beelink GT1 Ultimate) with Khadas Vim2 dtb.

What works: ethernet, wlan, bluetooth, emmc.
Panfrost support is getting better and better.

Thanks to the Manjaro ARM devs and Alyssa Rosenzweig!

Device stopped booting after Uboot update
The uboot update included a change to the extlinux.conf file. This change will be incompatible with the old 1 partition layout of some devices.
So if you are updating installs made with images 20.02.1 or older, you need to apply this fix before rebooting!
To fix this please edit your /boot/extlinux/extlinux.conf file and add 2 periods in front of each first slash, like so:

Save the file and reboot.

Hello. I’m trying to avoid any problems with my pending, fat update. I’m not sure if this affects me, but considering that I can’t find the “/boot/extlinux/extlinux.conf file”, then am I good to go? Thank you.

I’m not sure if this affects me, but considering that I can’t find the “/boot/extlinux/extlinux.conf file”, then am I good to go?

What device is it and what version did you install from?