Addition of a tweak tool like ArcoLinux Tweak Tool

With the wide variety of options and configurations Manjaro Provides, a handy tool like ArcoLinux Tweak Tool can be of great use. 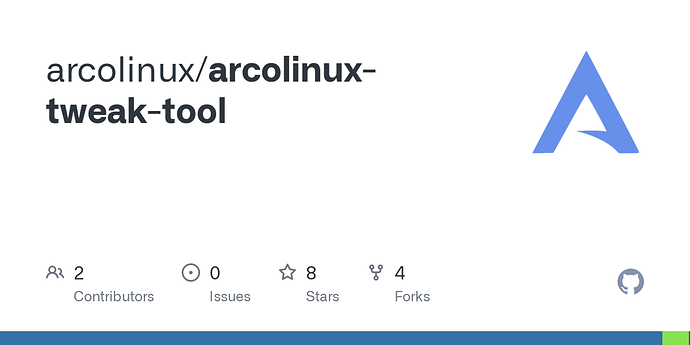 Contribute to arcolinux/arcolinux-tweak-tool development by creating an account on GitHub.

Is it possible and plausible?

Any word on this @Manjaro-Team ?

In my opinion, you can do it on your own if you feel confident building the package.

It may work - it is python - but I would think there would be too many issues with missing files and configs not available. You could experiment on a test system - vbox

The repo contains a desktop launcher - so launching could work - but there could be assumptions on the arcolinux packages which cannot be resolved from Manjaro repo.

Maybe you would need to add arcolinux repo

In any case - you should never post issues arising from the usage of said tool, never as it will make changes to your system - changes Manjaro know nothing about.

So beware of the

In any case - you should never post issues arising from the usage of said tool, never as it will make changes to your system - changes Manjaro know nothing about.

Probably, I have not clearly described my actual suggestion in the original post

. Actually, what I was saying if there had been a Manjaro exclusive tool similar to Arco Tweak Tool for customizing Manjaro it would be great! [Not installing the original ArcoLinux Tweak Tool in Manjaro, with potential possibility of system breakage] . Please point out if I am unable to expain myself clearly.

you want why and what ?

Arco Tweak Tool is an installer

It provides options to install other DEs and WMs other the preinstalled (e.g. - KDE on Arco KDE), which is nice.

termite - Agreed. But most people install neofetch anyway. So a graphical customizing tool can be helpful for new users.

Also agreed. But also, there is an adblock section which is quite good (as far as I know).
All I have done in this post, is suggesting the addition of a tool (or adding these functionalities to any existing one like Manjaro Hello) that adds some graphical options which might be useful to new users. After all, all of us in the forum want the best for Manjaro! And, of course, the developers understand what is necessary and possible or reasonable to do much better than I do