Add a "switch" button to the kernel settings page

The kernel settings page (on at least the kde edition) lacks switch button to change kernel. At the moment you can have multiple kernels installed on your system. However there is no visual indication on how to swap one for another. My solution has always been to uninstall all the kernels that I previously used, forcing my system to go with the only one remaining. It would be more convenient I could make use of a switch button. Where pressing it would tell the user to restart the computer for the changes to be applied. And on restarting, the kernels to be switched. Allowing users to test newer versions of the kernel. And if they find issues that dramatically effect their system, they can easily switch back. 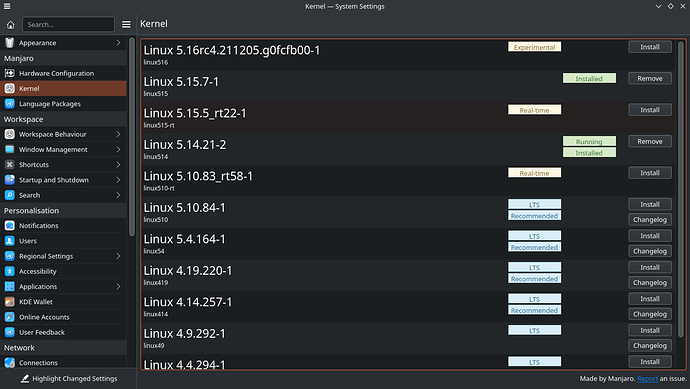 If you want to boot a different kernel, reboot and choose it from the GRUB menu. It will remember that selection.

It would be more convenient I could make use of a switch button. Where pressing it would tell the user to restart the computer for the changes to be applied.

For inexperienced linux users it would be really an improvement on user-friendliness, but on the other hand this “switch button”, must also deal with all other bootloaders, like systemd-boot, reFind besides grub. You have to create a new feature.

I think an easier way would adding a Infobox with a little description, how you should change the kernel on the boot menu… But hey, if someone wants to develop and maintain such a feature, why not?

Just look up here in the Wiki and the forum how to make your bootsplash visible.
Also, when multiple kernels are installed, after kernel update you will reboot with the latest anyway.

If you use grub, just set GRUB_DEFAULT to whichever kernel you want it to boot.

Thanks, I’ll keep that in mind. However users would need that extra information in order to find grub and switch. Plus being able to uninstall/install kernels but having to go to different ‘section?’ of the operating system that requires the users to have already know where to go in order to access, maybe a bit messy. Case in point, a gamer that wants to quickly test a kernel that may bring improvements to their games performance. Being able to completely manage their system’s kernel in a setting’s window that already built into their settings application, would be (in my opinion) invaluable. Compared to uninstalling everything bar one. Or searching around on google or this forum. When this could be communicated instantly with a ‘switch’ button or a link to a article explaining where the setting is.